As the days tick down to August 21st, 2017, Barack Obama plans to use the solar eclipse as an opportunity to complete the Rite of Ras’s Throne, an ancient ceremony in which the ‘one of darkness’ can reclaim the power of the ancient Egyptian god Ra.

[adinserter block=”1″]Obama’s fascination with the occult and mystic relics is well-known in the media community. Moles who have gained trust within Obama’s inner circle report Obama is already showing apocalyptic powers, including speaking ‘in a voice not of a normal man’, ability to brainwash a throng of followers and visibly manifesting Ra-like powers, including holding mini bursts of sunlight within his hands.

Over the past week, America has witnessed the increase in Obama’s psychic powers as he is causing his acolytes to take to the streets, ripping US monuments from the ground as they rally and protest.  All over Facebook and other social media, Obama’s followers are filled with the anger of Ares as they type in all caps to express their loyalty to Obama and unwarranted anger toward inanimate objects.

The same things were reported in ancient Egyptian glyphs.  Whenever Ra would arise from hibernation in his sarcophagus, his followers would immediately start to tear through ancient tombs and monuments, ransacking anything that did not favor their ‘god’.  So it is no surprise or coincidence that the old Civil War generals are seen as enemies to Obama and their relics are too being destroyed.

FOR IT IS WRITTEN:  “But immediately after the tribulation of those days THE SUN WILL BE DARKENED, AND THE MOON WILL NOT GIVE ITS LIGHT, AND THE STARS WILL FALL from the sky, and the powers of the heavens will be shaken. – Matthew 24:29

Only days ago, a great meteor shower took place (stars fall from the sky).  On August 21st, the Sun will be darkened and the moon will not give its light.  President Trump is facing his darkest hour and it is no coincidence it coincides on a day that Obama knew would be coming since before his last physical birth in Kenya.

The Christian Defense League of Texas is warning Christians to not look into the light of the Sun, as Obama will be using the visible light — even when filtered through solar glasses — to convert those who stare into his acolytes.  There are also reports that gays have found a way to craft the lens to create plane-polarized light in such a way it alters the brain and converts a person into sexuality the moment they look into the path of the eclipse.

With his Ra powers and hopped on Mars water that gives him the power of Ares, Obama will lead his followers in a war against the moral.  It is written “the heavens will be shaken” and Obama will use every trick of his sleeve, from all the acquired power to firing the ‘God-particle capturing’ Large Hadron Collider at anything that looks holy. 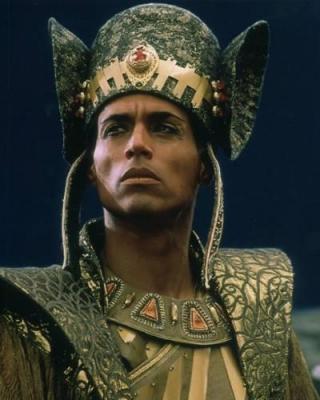 Obama was seen wearing an outfit of the ancient sun god, Ra, of Egypt,. Ra was said to have mastery over light and dark, a similar power accredited to the ancient angel Lucifer. Not much has changed between the Obama family’s ancestral role in ancient Egypt and today.

For nearly a decade the Obama administration has shown a nearly fanatical devotion to collecting ancient relics associated with the occult and supernatural ability.

[adinserter block=”3″]Sources report as early as the 1990s, Obama would travel back to his birthland of Africa to hunt down ancient relics in the fertile crescent.  Several villagers from Kenya report that on July 31st, 1996, Obama carried out the first of the ‘subsequent Ecclestiastical full moon’ rituals, knowing that if he completed the second ritual, he would invoke the ancient Blue moon prophesy.

The Rite of Stonehenge 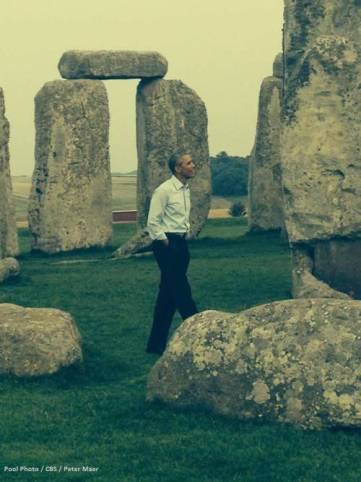 Obama walks through Stonehenge, relishing in the sacred grounds of ancient darkness.  Here, Obama completed a right to imbue himself with the powers of ancient priests and false gods who were said to be fallen angels. 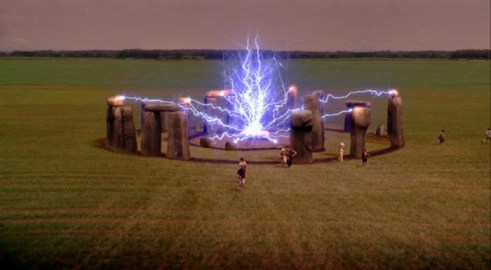 Hours after walking through Stonehenge, eyewitnesses report that Obama chanted some line while holding a hammer-like relic skyward.  Locals fled into the fields while secret service members ducked for safety.  It is said afterward Obama’s voice echoed like an auto-tuned ocean and his eyes did not look like a human.

Obama’s feat at Stonehenge is easily explained by the following image media that has made its way through conservative social media networks. 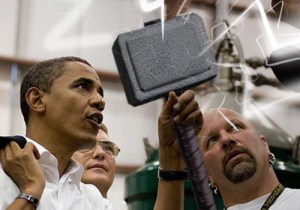 Terrified scientists can only look on as Obama lifts an ancient Norse relic called ‘mjolnir’.  A close look at the intricate craftmanship of this ancient relic shows its ties to the occult and Illuminati.

Obama took this relic from Sweden, the locals unable to stop him as he boarded Air Force One and flew straight for Stone Henge, where he used the weapon to bring a great dark power upon himself.

Liberal media will try to deny these claims, but after Obama completed this rite he started to display mastery over the sun, the moon and the weather.

Onlookers will look at images of Obama in his Khonshu moon ritual outfit and find that he looks young.  Beneath the White House, eyewitnesses have seen evidence of a sarcophagus where Barack Obama and his Illuminati friends such as Susan Lucci, John Kerry, Johnny Depp, Robe Lowe and Elijah Wood take turns defying age and death itself during the blue moon ritual.

What Does The Solar Eclipse Mean for America’s Morality

America will only grow into a darker nation.  Expect more gay marriage, more natural disasters, more societal unrest and blatantly supernatural events such as meteorites dramatically crashing into all sorts of symbolic things and more celestial phenomena.  Poor people will only get more and more healthcare and free food, while the hardworking and Christian find their persecution increasing for trying to adhere to America’s true path of righteousness and it may even come to pass that President Trump comes to pass and with hearts hardened, people vote against Republicans and give Democrats control of Congress.

The end, dark times are upon us.